Today we feature a pair of full-lengths that consist of previously-released EPs plus about five new songs. Although it's not a practice I'm fond of, the music here is good enough the second time around, and those who missed out on the EPs will want these full-lengths.

The Offbeat-In Love Field. First, I'll cut and paste from last year's review of To The Rescue, whose five tracks are repeated here:

The Year of the EP continues as another outstanding one comes down the pike, this time from the Brit popsters The Offbeat, whose self-titled debut last year was a real treat. If you liked that disc, then you'll love this EP as it serves up more of the same Merseyside, early Beatles pop without being too retro. "She Can Make the Sunshine" lives up to its name as glorious sunshine pop, "Someday Somehow" uses the "Bo Diddley" beat to nice effect, and "Blue Sky" is jangly goodness.

How about the new tracks? They're worthy additions to the Offbeat canon. Among them, "Where is the Girl?" is a moody Beatlesque number in the vein of "For No One", "Word to the Wise" has a George Harrison jangly vibe to it, and "A Love to Last" channels Billy J & The Dakotas. If you missed the EP, don't miss out here. 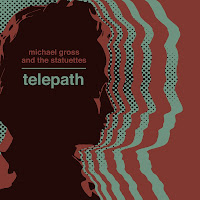 Michael Gross & The Statuettes-Telepath. Early this year upon the release of their EP Impulse & Exports, I wrote "I can wait for a full-length if Gross & Co. are content to crank out a top-notch EP every six months or so." In essence, that's what they've done, adding six new tracks to I&E to make up their debut full-length. Here's what I had to say about the EP:

Gross & Co. have further refined their heartland-rock-with-a-touch-of-Americana sound. The noirish "Keep Driving" sets the tone with its late-period Replacements rock style, and the moody yet urgent "On and On" is equally outstanding. And for those familiar with Gross and his earlier solo disc Tales From a Country Home, he offers up a full-band version of that disc's "No Good", and it's anything but.

As for the highlights from the new tracks, "When the Curtains Come Down" is a fine soft/loud rocker, the fast-paced "You Can't Go Home Tonight" will leave you breathless, and "Real Gone" earns the 'Mats comparison again. Again, this is a fine introduction to Gross & Co. if you don't already have the EP. Or just pick and choose your downloads if you do.

Labels: eMusic, Michael Gross and The Statuettes, The Offbeat