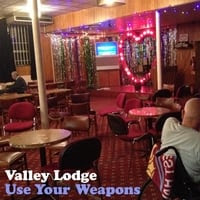 Why do we listen to power pop? At one level, it's the love of a catchy melody, ringing guitars and a steady beat. At another - for many of us - it's the music of our youth. But at the most elemental level, we listen because it's fun. Power pop appeals directly to the pleasure centers of our brains. And no band encapsulates this appeal better than Valley Lodge, who brings us Use Your Weapons, their third album.

Led by funnyman extraordinaire Dave Hill, it's tempting for some to write off Valley Lodge as a joke band, as merely an example of Hill's performance art. And I couldn't exactly argue that analysis if you chose to make it as Hill & Co. rattle off every rawk cliche in the book in both their performance and presentation. But whether tongue-in-cheek or not, there's no denying that their music is preternaturally catchy, rocking, and most of all - fun. Their brilliant self-titled 2005 debut was the perfect example of this, and still to this day remains perhaps my favorite power pop album. 2009's Semester at Sea was good fun as well, but the emphasis on glam rock made the "put-on" aspect of their act a bit more distracting (still, Semester did yield awesome rocking tracks like "The Door", "Baby, It's a Shame" and "When the Rain Comes", which found success in excess).

Use Your Weapons, it could then be said, is a return to form. It's more of a piece with the debut, which means it's time to turn your brain off and just embrace the non-stop fun. Opener "Go" is relentless, rambunctious and infectious, and has a rare quality in power pop - you could pretty much dance to it. (Here's a link to the video I posted a couple of weeks ago, which you need to see if you haven't already). "Sweet Elizabeth" lets you catch your breath, but isn't exactly a ballad with its glam rock and speedy Bo Diddley-style beat. The midtempo "Kiss Me I'm Drunk" finds Hill in vintage bad-boy mode and features a great bridge, while "Pretty Thing" rocks with abandon in a fashion similar to "The Door". And "Make Up Your Mind" closes out the first half of the album with a near-perfect slice of almost Big Star-like pop.

The second half of the album is no letdown either. "Waiting in the Rain" sounds like a lost garage rock tune from the 60s, and "Gimme Gimme" brings back Hill's penchant for incorporating 70s pop R&B into the mix much as "All of My Loving" and "Hanging On" did on the debut. Its Jackson 5-like chorus will have you grinning from ear to ear. "Are You Okay?" keeps the rawk going and features some of Mr. Hill's best shredding, "Restless Heart" is light glam rock a la Sweet and throws in horns in support of yet another supremely catchy melody, and closer "Blind" - with its 80s synths and frenetic melody - leaves you wanting more. They may be called Valley Lodge, but if you believe in truth in advertising Nate Ruess needs to cede the name "fun" to Dave Hill because this is the band that really lives up to that moniker.

Any idea if this will be released on cd or as a download only?

yes - it's out in Japan with two bonus tracks
www.thistimerecords.com