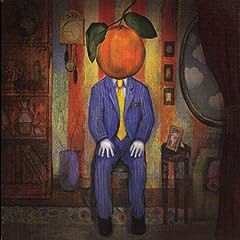 Well, we've been hyping the week-by-week rollout of tracks from this album, so now that it's officially T-Day and the album is released, it's the obvious choice for today's CDotD.

Having now finally heard the whole thing, I've come to two conclusions: 1) it's not the pop masterpiece that Wherever You Are was, and 2) nevertheless, it's a darn fine album. Tangerine is a fairly eclectic mix of pop styles, from the downright funky "Chatterbox", to the gospel of "Reminded #1", to the more conventional pop of "Hallelujah, I Was Wrong" and "Fighting For Your Life". Hopefully most of you that regularly read this site have heard most of these songs as they were rolled out on his myspace page, so you should have a pretty good idea of what you're getting here.

If you need to refresh your memory, or are new to these tracks, I strongly suggest you send yourself David's e-card from his site, which streams 10 of the 12 tracks on the album. And the album is available from eMusic, so subs can grab it there (yet more reason to click over on the right and sign up) and everyone can get quick 30-second samples. Otherwise, it's available at just about any online music seller, as this is hardly an obscure indie release.
Posted by Steve at 8:04 AM

very nice album.
i am enjoying it a lot.
i have to recover my copy of "wherever you are" (wherever it is...) and listen to it again!
nice voice and nice songs.