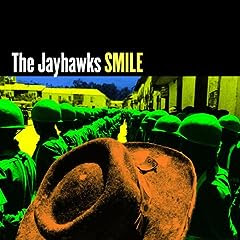 Time to resurrect my "#1 album of" series today, and next on the list going back in time is The Jayhawks' Smile, my favorite disc of 2000. The Jayhawks, of course, are one of the seminal alt-country bands of the 90s, but after primary singer/songwriter Mark Olson left the band in 1996, Gary Louris decided to soldier on and moved the band in more of a pop direction in 1997's Sound of Lies. But it wasn't until Smile (the album title itself is a nod to Brian Wilson) that Louris and the Jayhawks achieved pop perfection. Louris brought in veteran producer Bob Ezrin (who's produced albums by artists as varied as Alice Cooper and Air Supply) to man the controls, and it was the band's big move to try to break mainstream.

But while Smile failed to catch the general public's ear, it was still a brilliant pop album and was well received critically (in fact, the following year an article about the album appeared in the New York Times titled "What if You Recorded a Masterpiece and No One Cared?"). Had this album been released in 1975 instead of 2000, we might be talking about it today they way people talk about, say, Fleetwood Mac's Rumours. The album starts off with the anthemic title track ("Smile when your're down and out"), and leads into the irresistible single "I'm Gonna Make You Love Me", which actually did receive considerable airplay at the time. Co-written with Music Row pro Taylor Rhodes, the chorus is one of those you can't put of your head. "What Led Me To This Town" follows, and along with "A Break In The Clouds", represent the more traditional aspect of the Jayhawks' sound. Both are beautifully written, melodic gems in which Louris duets with Karen Grotberg for a real Gram-and-Emmylou feel. But in between those two tracks is "Somewhere In Ohio", another pop gem complete with looped drums (!) and a great "ba ba ba" refrain in the chorus.

Other standouts include "Queen of the World", an almost danceable number, and in case the title of the album wasn't allusion enough, we get "Mr. Wilson", Louris's paean to the tortured genius of both Brian Wilson and Alex Chilton in one of the album's more poignant tracks. And even the back end of the album is filled with quality: the pulsing "(In My) Wildest Dreams", "Better Days", a great Americana-ish number, and the closer "Baby Baby Baby".

Sample it at Amazon, where there are several used copies selling for less than $2 in the marketplace. It'll be the best >$2 + shipping you'll ever spend.