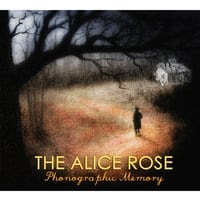 The Alice Rose is a band from Austin, Texas, whose lead singer/main songwriter is a dude named JoDee Purkeypile. For those old enough to remember the Smuckers commercials, all I can say is that with a band led by a guy named JoDee Purkeypile, you know they have to be good. The operative style here is melodic pop with a touch of an "indie" sound, and they should have broad appeal to both the indie and pop crowds. Influences to the sound range from Jon Brion to Squeeze to The Beatles to 80s British pop.

Among the highlights: "Light Up" is an atmospheric rocker with a graceful melody; "Save Me" has a Lennonesque feel, almost as if "Hey Bulldog" was slowed down a notch or two; "Lamplight" is oustanding power pop; "Ocean" has an anthemic Coldplay-like sound; "All Over Your Body" is absolutely Beatlesque; and "West" falls into the Jon Brion/Michael Penn camp.

If you want to check them out, they can be found at the usual suspects: MySpace and CD Baby. Would an Alice Rose by any other name sound as sweet? Find out for yourself.
Posted by Steve at 9:39 AM