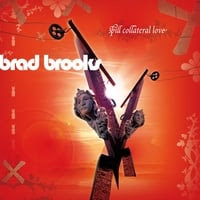 And now for something completely different. Brad Brooks stretches the boundaries of power pop with Spill Collateral Love, a tour de force of different pop stylings that share the same level of inspiration. I've seen comparisons of Brooks to a number of different artists, with the consensus being that he's Freddie Mercury meets Guided by Voices. There's certainly an element of that in there, but there are several others that shine through.

For example, the leadoff track "Love On My Sleeve" builds to a Rufus Wainwright via Thom Yorke crescendo that never wears out its welcome over nearly six minutes. "Lathered In Cream" is the closest to straight-ahead power pop, but it adds its own subversive GbV element as well. Other standouts include "The Loon of Altitude" (which starts off as a poppy-California-sounding ditty, only to dissolve into a "I Want You (She's So Heavy)" wall of sound, only to dissolve again into some ragtime piano with unintelligble whispers), "Francis of Alaska" (Freddy & Rufus again), the near-jangle of "The Sonic Twins", and the 40s-style crooning of the finale "Luccurious Latitude". Spill Collateral Love is the power pop equivalent of an art film, and although it my lack the immediate hooks that we normally deal in here, it's worth the effort to explore.