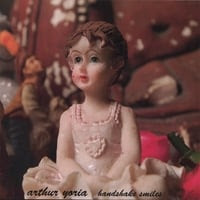 Arthur Yoria is back with a full-length release, and if you're not familiar with this Houston-based power popper, you're missing out. His I'll Be Here Awake was one of the top discs of 2003, and last year's EP/Single Something Must Be Wrong featured one of last year's top tracks in the title tune.

Handshake Smiles is another winner, although it's a bit more stripped down than Yoria's previous releases, which isn't unexpected given it was a "bedroom recording". The disc opens with "Should Be", a pretty (and melancholy) number that recalls Jon Brion, while "Clean For Free" follows with an Americana-ish sensibility and wouldn't have been out of place on the new Wilco disc. The title track is vintage jangly pop, and "Love Song In G" is the classic Yoria power pop that we've come to know from his earlier releases. Other highlights include "I Told You Not to Write Again" (power pop complete with banjo!), "Sandy", and the wistful closer "Trash Bag", which evalulates a long-term relationship with an understated beauty, both lyrically and melodically. Handshake Smiles is a triumph for Yoria, who's managed to avoid repeating himself without sacrificing his tunefulness.