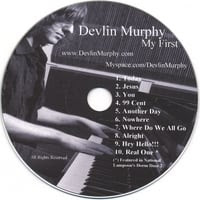 Here's a stunner. LA's Devlin Murphy has come out of nowhere to give us one of the more exciting debut releases of the year. Here's hoping My First won't be his last, as Murphy manages to channel many of the classic power pop influences, from young to old. I hear traces of everything from The Click Five to Fountains of Wayne to Michael Carpenter (to whom he bears a slight vocal resemblance) to Jellyfish in here, and it's always a treat when someone puts a fresh spin on familiar sounds. (Actually he sounds exactly like the lead singer of Cone of Silence, for those familiar with that obscure reference.)

No quality disc is without a great opener, and My First is no exception with "Today", which will take you in on its first listen, and then stick you with it's "Today-ay-ay-ay" chorus for the rest of the day on rotation in your head. "You" isn't particularly remarkable lyrically, but damned if it isn't ultra-catchy. Meanwhile, he manages to come up with the first theme song for dollar stores with "99 Cent", and his "Another Day" is almost as melodic as McCartney's. He even demonstrates a facility for the (power) ballad with "Nowhere". And don't miss "Alright", which hits all the right power pop buttons.