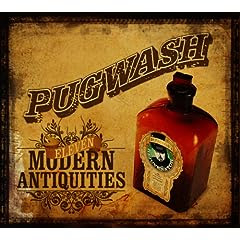 This is a bit of me putting the horse behind the cart - you may recall the latest from Pugwash (a/k/a Thomas Walsh) was #8 on my first quarter best-of list before I had even mentioned it on this site. And Jollity, his previous release, was my #13 disc of 2005. Moreover, odds are if you're reading this blog you already know about this release. Nevertheless, it's so good it deserves a proper review. Eleven Modern Antiquities is a worthy followup to Jollity, and all of the things that made that disc great are present here, perhaps even more so. For example, Jollity had one track co-written with XTC's Andy Partridge; this one has two ("My Genius" and "At The Sea"). Fellow XTC member Dave Gregory is back to play on several tracks; Eric Matthews contributes flugelhorn on "At The Sea", and Nelson Bragg figures into just about every track as well. Plus Michael Penn shows up for a guitar solo on "Limerance". Power pop doesn't get any better than this on paper, and thankfully the songs are the equal of the luminaries on board. Standouts include "Take Me Away", for which I've helpfully appended a video at the end of this post (and on which Jason Falkner adds guitar); "Here", the kind of stately ballad that McCartney and Partridge (and now we can add Walsh) are so expert at; the poptastic "It's So Fine", and "Your Friend", Antiquities' answer to Jollity's Brian Wilson-influenced "It's Nice to be Nice". As I said in so many words about Jollity, XTC may be gone now, but as long as Walsh keeps putting out great discs like this, you won't miss a beat.

Hi there, I just scored a radio interview with Thomas from Pugwash. If you'd like to hear it, it's up at http://blog.palopop.org/2008/07/pugwash-eleven-modern-antiquities.html. Cheers!