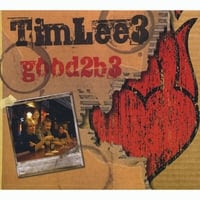 May is turning out to be roots-rock month here at Absolute Powerpop. On the heels of last week's featured Brewery Records releases, here's one of the leading lights of the subgenre, Mr. Tim Lee and his latest. Lee, one-half of the semi-legendary and criminally overlooked The Windbreakers (along with Bobby Sutliff), has carved out a distinguished solo career and here he's released Good2b3, his first full-length as the Tim Lee 3, a band comprised of Lee, his wife Susan Bauer Lee (who wrote and sings on many of the tracks), and Rodney C. Cash.

The melodic rocker "'Til The Roof Caves In" kicks off the proceedings and features a blistering guitar solo from Lee. "Saving Gracie" follows with a purer power pop sound, recalling The Smithereens and featuring a vocal turn from Mrs. Lee. Meanwhile, "Chronic Liar" is a Windbreakers-style jangler that she wrote, and if you look up "roots rock song" in the dictionary, "Mile-Long Midway" would (or at least should) be there, replete with its references to corn dogs and KISS T-shirts. I'd say Good2b3 is Good2pickup as well.

I Have Been A Faithfull Listener Of Tim Lee Since The Mid 80's,The Windbreakers Run Was The First C.D That Exposed Me To Tim's Unique Style Of Rock. Back Then I Would Have Guessed Tim Was Going To Be Just As Big As Tom Petty,He Was as Good A Songwriter And Vocalist,But He Just Had More Drive And Energy In His Music Then Petty.The New C.D Good 2b3 Ranks Up There In Best Albums Of This Year!,If You Have Not Ever Listened To Tim's Music Check Out The Samples On The Tim Lee 3 Website, This Is Not Really Powerpop But Just Good Ol' Rock And Roll With Drive And A Southern Bend. Do Yourself A Favor!
Get This C.D! Jimmy Drew
Portsmouth Virginia, Rock And Roller