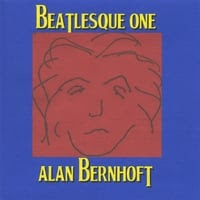 LA's Alan Bernhoft is a veteran music pro who's played in a punk band, written rock musicals, scored movies and released a children's album, just for starters. Along the way, he's recorded a number of tracks that are yes, Beatlesque, and he's compiled them here in Beatlesque One. So while there's no mystery as to the operative sound here, the question remains: just how good are these "Beatlesque" tracks?

Answer: Pretty darn good. Bernhoft covers most of the Beatle era in sound here, so the effect is not unlike a Rutles album. "Keep Your Hands Off My Baby" is the leadoff track, and it perfectly captures the Early Beatle sound and is quite reminiscent of "Leave My Kitten Alone". "Magic Everywhere" would be at home in the mid-period of Rubber Soul and Revolver, and "Someday" and "Sunshine Girl" are dead ringers for some of McCartney's more playful moments while "Winter Ocean Mary Go Round" hints at Lennonesque psychedelia. Perhaps the standout track is "Growing Older", which has an "Eleanor Rigby"-like melody in the verses (without the strings) and then merges it with an "I've Just Seen a Face"-like chorus. The disc closes with three children's tracks, but are quite enjoyable on their own terms. As the producer of an independent movie about McCartney noted, "We couldn't afford The Beatles' music, so we got the next best thing- Alan Bernhoft", and if your tastes run more to the whimsical McCartney side of the Beatles, Beatlesque One should be Number One on your list to get.