CD of the Day, 9/3/08: Captain Wilberforce-Everyone Loves a Villain 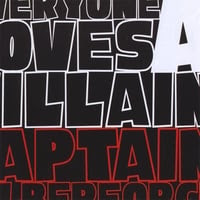 Back when I did an early-year top 25 in April*, this disc came in at #25 even though I hadn't mentioned it on the site. It was an mp3-only deal at first, then an import-only disc, and now is finally available domestically in the USA. Captain Wilberforce is Simon Bristoll, which is about as Brit-sounding a name as one can have, and by and large, his music is as Brit-sounding as it gets. His debut release, 2005's Mindfilming, was one of the more underrated and overlooked releases of that year, and it would be a shame if this followup suffered a similar fate. So let me put it simply: if Michael Penn or Jon Brion had grown up in Leeds instead of L.A., this is what they would sound like.

Bristoll, er Wilberforce, is equally adept with the uptempo tracks as well as the slower, languid ones. In the former camp are "No Strings or Ties", the rollicking opener; the near-title track (I say "near" because it's titled "Everybody Loves a Villain"), which has an XTC-meets-Jackdaw4 vibe, and "The Longest Night", which reminds me in a way of Coldplay's "God Put a Smile Upon Your Face". In the latter camp are the lush, pretty "The Girl Who Broke Her Own Heart", the McCartneyesque "A Different Sea" and the acoustic closer "The Twilight Kids". Topping them all is the Jellyfish stomp of "Born Again Brand New Man", a bright, bouncy track that bears a bit of Beach Boy influence as well. Well done, and it'd be a good thing to have a little Captain in your music collection.

*I should have done a mid-year best-of, but never did, and now that it's already September, I'm just going to wait for the year-end.
Posted by Steve at 12:52 PM

Love this record - saw it in your top 25 months ago and noticed you hadn't written about it, but Not Lame's write-up convinced me to pick it up.

What a find -- if it makes my top 10 of '08 (which right now I'd say is quite likely) I'll do a more thorough review, but the 5-second review of it would basically be that it's this year's Bipolar Diversions. I think the Jackdaw comparisons are highly apt and all over this record.

Basically, if you like Jackdaw4, you won't be disappointed with "Everyone Loves a Villain."

Thanks a million for this tip! The album easily makes this year's top 10, we might even talk about the very summit! My immediate comparisons would be "Roger Joseph Manning Jr meets Josh Pyke", but I clearly hear Stringfellow/Auer (especially their later stuff, both together and as the Posies) in there, and some Matthew Sweet (esp. his wall-of-sound outing In Reverse), as well.