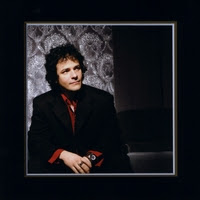 Rob Bonfiglio might not be a household name (at least in power pop households), but the bands he's been in are. A longtime member of Wanderlust and most recently in charge of The Skies of America (whose Shine was one of 2006's best), he now has his first proper solo disc out and he's going to Bring on the Happy for power pop fans everywhere.

Much as he did in The Skies, Bonfiglio has a power pop sound that's big - big choruses, big hooks, big melodies. It's kind of a cross between indie power poppers like The Meadows and Velvet Crush and big name artists like Matthew Sweet, Collective Soul and Oasis. "Nothing Will Hold You Down" jumps out of your speakers right away, with hints of poppy funk/R&B in the verses matched with a big rock chorus. "That's Alright" is a hooky rocker in the Matthew Sweet vein, while the midtempo piano-based "How to Mend a Heart" brings to mind artists such as David Mead and Randy & The Bloody Lovelies.

Meanwhile, "React" brings to mind an old test I've had for albums over the years. If the fourth song is right up with the first three, the odds are very strong that the album as a whole will be outstanding. By track #4, really good albums will hit a groove and develop a momentum of their own. By bringing this up, it should be no surprise that the rocking "React" passes this "fourth track test" with flying colors. The hooks continue relentlessly on "What You Need", which doesn't wear out its welcome at 5:41. Bonfiglio does a good job of mixing it up as "Straight From the Heart" follows, a wonderful Brian Wilson/Bacarachian number. The rest of the disc is sublime as well: the Rundgrenesque "The Best Is Yet to Come", the good time Stonesish rock of "Blow Me Away", and the wonderful closing ballad "Some Days are Better".

If I could boil this review down to one word, it would be "quality". Nothing even close to resembling a bad track, a professional sound, and just one hook after another. Power poppers everywhere can't ask for much more than this, and Bring on the Happy may be bringing on my top 10 (which reminds me, I need to get cracking on the year-end list).

Do I own an Matthew Sweet cd.. several.. CHECK

Going to have to buy Rob's cd also.. thanks for reviewing it.