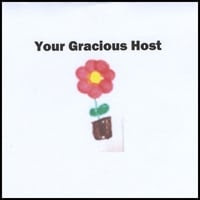 Flint, Michigan has been synonymous with documentary filmmaker Michael Moore and as ground zero for the economic blight that has hit the manufacturing sectors of the United States, but there is a flower in the dirt: Your Gracious Host, the new project from Flint singer/songwriter Tom Curless. YGH has fashioned one of the most audacious tricks in the music industry book - the double-disc debut album - and has pulled it off. Curless mixes indie pop and power pop to fine effect, and fans of Teenage Fanclub, The Shins, XTC and a host of other similarly minded and sounding bands will enjoy this generous offering.

The uptempo "Minutes=Hours" begins the proceedings, and it has a TF vibe; the densely melodic "Admit to Myself" recalls Elliott Smith; "Changed So Much" sounds a track off the Pernice Brothers' Yours, Mine & Ours album; The acoustic guitar-driven "The Big Leap" has a breezy, 70s feel; the power poppin' "Time to Spare" brings Robert Pollard to mind, while "Reaching Stars" is positively Posies-esque. And that's just the first disc.

Disc 2 rocks a bit more and features "I Feel Alright", a rootsy power pop number in manner of Marshall Crenshaw; the driving "Why You're Here"; the dreamy "Taking Time Away", which also channels The Posies; "Really Too Late", which brings a bit of Bob Mould into the mix; and closes with the lovely "Cloud In The Sky" which has a bit of a High Llamas/Cloud Eleven feel. All in all, there's 21 tracks here for the price of a single disc, and if they all don't work for you, odds are at least 2/3rds of them will. You'll want to RSVP to Your Gracious Host.