EP of the Day: Frankel-Chatterbox 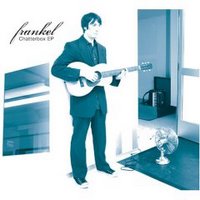 Todays' EP find is Chatterbox, the debut from the artist known as Frankel (actually the nom de plume of Michael Orendy). Elliott Smith and Jon Brion are the names that the critics have been throwing around for comparison purposes, and I can't disagree - the string-laden "The Great Unknown" would have fit right in on Smith's posthumous From a Basement on the Hill. I also hear some Grandaddy in there as well, and "Antidote" even sounds a bit like one of Dave Grohl's Foo Fighters ballads. The best track here is "Don't Leave", which is where the Smith-meets-Brion influence is at its most overt. But you don't have to take my word for it, here's the mp3:

If you'd rather stream than download, Frankel/Orendy has the obligatory myspace page with "Don't Leave" and "Method Actor" featured.
Posted by Steve at 1:08 PM