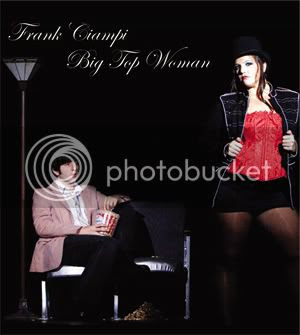 Here's one that's been worth the wait. Back in early days of this blog (February 2006), I gave props to Frank Ciampi, who at that time basically had 3 songs out and which were only available at his MySpace page. Fast forward to December 2007, and at long last we have Big Top Woman, the full-length album which displays the promise those three early tracks displayed.

The operative sound is piano-based power pop, but with a Brian Wilson influence; you might almost say it's Ben Folds meets The Wondermints. The three oustanding tracks that I blogged about earlier are all here, in the 7-8-9 slots, but the new stuff meets or exceeds the quality of those. The horns and time shifts in "Little Girl" are worth the price of admission alone; "Madeline Maybe" will stick in your head - no maybes about it; "Waiting For Someone" would have fit in nicely on Smile (yes, that Smile), while "The Miss Jenny" is like the middle eight of McCartney's "Uncle Albert and Admiral Halsey" taken to full song-length. There isn't a bad track here to be found, and Ciampi has gotten his disc in just in time to make the big list coming out next week.

MySpace (Where you can also buy the disc or the mp3s)
Posted by Steve at 12:01 AM

I once hired Frank Ciampi as my courier at one of the worst jobs I ever had. I knew that he made music but had no idea what kind, though I did know he was into Brian Wilson because he'd cut out an ad for the 2004 version of "Shine" and stuck it up in his cube. I wound up getting the hell out of there not long after and I think he did too, but I'm glad to see he's doing so well. I feel bad for dragging him into that horrid place to start with. I wish I'd taken more time to talk music with him!