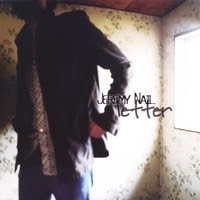 Back in 2001, I was a huge Ryan Adams fan. He was coming off the previous year's Heartbreaker, a classic disc, and the follow-up Gold was #2 in my year-end list while Whiskeytown's delayed-release swan song, Pneumonia, was right behind at #3. (My #1 was this.)
But I soon became disenchanted with Adams for much the same reason I stopped collecting baseball cards in the early 90s: there were just too many releases to keep track of, the quality went down, and everyone was jumping on the bandwagon. But somewhere in the plethora of unreleased and bootlegged studio discs that accompanied the plethora of official releases was a rock album he cut with his then-backing band The Pinkhearts. That album found him channeling Paul Westerberg circa The 'Mats, and had some quality tracks like "Win" and "Candy Doll" and hinted at a potential path he could have taken.

Which brings us to Jeremy Nail, who with his debut disc Letter may have finally delivered the Adams-Westerberg hybrid disc we've (I've) been waiting for. Reminscent of Adams, he's sometimes billed solo and sometimes with his backing band (The Incidents), and like both of them at their best, he combines rock, pop and Americana with quality songcraft. The driving opener "Paper Doll" is Exhibit A for this premise with its haunting melody and quality guitar work. Elsewhere, "Last Goodbye" conjures some of Adams' best work from Pneumonia-era Whiskeytown with a great midtempo roots melody and female harmonies; "Lucky Girl" is playful pop, something that might sound like Jellyfish if Sturmer et al were more obsessed with Bruce Springsteen and Steve Earle rather than The Beatles and Queen; "Beautiful Storm" brings anthemic BritPop into Nail's roots mix; "Wake Up, Julianne" brings to mind the late period 'Mats of All Shook Down; and "Afterdark" adds a little Neil Finn. And as I'm wont to close my reviews with a bad pun, let me just say that he really Nailed this one.

what's your mailing address? I want to mail you a cd you might dig...just email me at either sawnie@comcast.net or trip@aldredgelaw.com. I promise it won't suck.
Trip Aldredge

He definitely got a belly laugh out of that last line I bet!