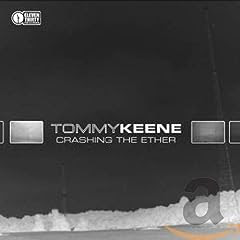 Tommy Keene is one of the true power pop vets out there, and he has his first new album in four years out today, Crashing The Ether. Featuring help from ex-Gin Blossom Jesse Valenzuela, Crashing The Ether is a return to form and worth a pickup.

The first great track on the album is "Warren In The 60s", an ode to Mr. Beatty featuring the best mix of jangly guitars and nasally vocals this side of Roger McGuinn. The midtempo "Wishing" is another keeper, striking just the right note of melancholy. Keene rocks out on the second half of the album, starting with "Eyes of Youth" and continuing through the six-minute finale "Texas Tower #4", which albeit does descend into a bit of extended guitar wankery at the end. Check it out for yourself with a couple of mp3s:

The whole shebang is available on eMusic, which is also a good place to sample it in 30-second chunks. Keene is also touring with Guided by Voices' Robert Pollard, and the two of them have collaborated on an album to be released later this year under the moniker The Keene Brothers. Looking forward to that one as well.
Posted by Steve at 6:18 PM