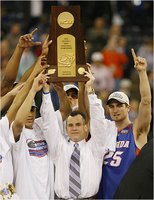 When I was at the University of Florida in the mid-80s, they had never even qualified for the NCAA tournament, let alone succeeded in it. To think they'd make three Final Fours and win the national title 20 years later would have almost been unthinkable. Although it's heresy in these parts, I'm enjoying this basketball title even more than the football championship the Gators won in 1996.

Power pop blogging will resume later today.
Posted by Steve at 12:23 AM

Congrats to the Gators. But did the Bruins ever come out of the locker room? Not sure I ever saw them out on the court. That lackluster performance by the Bruins cost me $175!

I spent 87-91 in Hogtown (although I was a few years older than your average student) and loved every day.