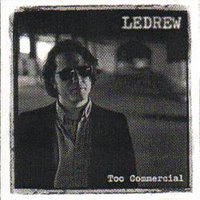 For those of us who have become big fans of the Brothers LeDrew over the last couple of months, I'm happy to report coming across Too Commerical, the solo disc from 1997 by Chris LeDrew, simply credited to "LeDrew". (hat tip to commenter Woodsie on the original post for alerting me to its existence).

While not the jangle-pop perfection of Brothers In Stereo or Andrew's Ladies Lookout (currently holding down my #2 spot for 2006), Too Commercial is outstanding nonetheless, at least from the seven tracks I've heard (and you can hear too) on garageband.com. The title track rocks out a bit more than the other two discs, but "Sweet, Sweet Bronwen", "Not Anymore" and "Gettin' Outta Here" jangle right along with Brothers In Stereo and Ladies Lookout.

Four of the seven tracks on garageband are available for download (The last three I mentioned above plus "What's Wrong, Arthur John?", a fine track that reminds me a bit of The Kinks' "Picture Book"). I just snagged a copy on eBay for $9 shipped, but there's one other available for $6.99 plus shipping from a different seller, so get it while you can. I'll have to post an update when I get the disc and have a chance to hear the other four tracks.
Posted by Steve at 1:59 PM