CD of the Day, 7/8/06: Craig Bartock-The Finer Points of Instinct 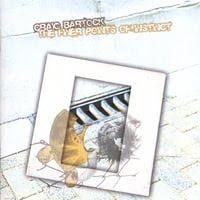 It's always gratifying to see a sideman to a famous act finally get the chance to spread his wings and go solo, and over the past couple of years the power pop genre has seen several examples of this phenomenon yield great discs. From Fran Smith Jr. to Fran King, from Brian Ray to Rusty Anderson, from Phil Ayoub to Joe Kennedy and Darren Jessee (Hotel Lights), we've seen many discs where the sideman outshone their more famous collaborators. And of course I wouldn't have gone through all this preamble if today's disc, Craig Bartock's The Finer Points of Instinct, wasn't another such example.

Bartock in this case plays guitar (and writes) for current incarnation of Heart and his solo debut is a power pop tour de force with influences that range from Jellyfish ("Dollhouse", "15 Minutes"), Elliott Smith ("Goodbye", "Lazy, Listen"), The Beatles ("Nevermind"), Eric Matthews ("Lucky"), solo McCartney ("100 Reasons"), Brian Wilson ("Things I Know") and in my favorite track on the album, Teenage Fanclub ("Myopic Day"). Bartock obviously had a lot of songs stored up, as the disc spans 16 tracks. While things trail off a bit on the back end, you should have no trouble finding 12-14 songs you'll love, more than can be said for most discs.

Stream five of the tracks I mentioned above (including "Myopic Day") at his myspace page, and listen to whole thing at Rhapsody (you can listen to 25 free tracks a month, or get a free two-week trial with the software without having to enter any personal info). If you're ready to buy, or want to sample the rest without trying Rhapsody, head on over to CD Baby. This is a great disc, reminding me a lot of one my top 20 from last year, Jim Boggia's Safe In Sound (who not coincidentally is another sideman gone solo).
Posted by Steve at 6:45 PM