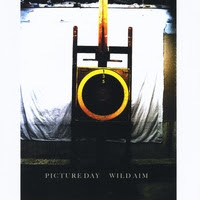 There's a certain subgrene of pop/power pop that I like to call "rainy day pop" - tuneful but subdued, hooky but not hyper. It's no coincidence that Picture Day, today's purveyor of rainy day pop, comes from the Pacific Northwest where rainfall is a way of life. Picture Day is the brainchild of The Green Pajamas' Eric Lichter, who wrote the songs here and had them performed by an impressive cast of friends including Ken Stringfellow and Jimm McIver. In many respects the sound here is similar to the Pajamas, only more down-to-earth and personal, despite the guest appearances.

The disc is highlighted by a pair of tracks that take a hard look at war. The brilliant "War Song" opens the disc, a gentle piano-and-acoustic-guitar based pop number that sets the mood for what's to come. Drawing its inspiration from WWII ("Buried in the deep dark frozen/hiding in the hills of France/scattered to the winds in Poland/resurfacing up by chance"), it's both haunting and ear-pleasing. Later in the album is the somber "Average Coming Home", a look at how tough coming home from war is on a soldier.

It's not all war on the battlefield, though. The war inside our hearts and minds is explored on "Mental Kiss", another moody pop gem with a British flavor, and the title track has a pastoral feel like mid-period Kinks or some of Andy Partridge's work in XTC. "God Replace" furthers the album's sophisticated pop milieu, and Stringfellow plays and sings on "Little Bigger", a lovely, stately ballad.

There are a few sonic detours here. "Piano Pins" marries a rapped lyric to a horn-backed rhythm section that sounds very Green Pajama-like, and "Ever Shining Super Effect" is the closest thing to power pop in the traditional sense. Things close in fine fashion with "Whispers Off The Radio", another languid-yet-melodic tune. Like the camera on the album cover, Picture Day captures a distinct feel and mood. It may not be California sunshine, but it's perfect for that rainy day. A definite sleeper candidate for our year-end lists.