The 88-The 88. Freed from the constraints of their brief major label deal, The 88 continue to be prolific. Their latest, self-titled, release makes it two full-lengths and an EP since 2008's Not Only...But Also and so far they're not sacrificing quality in the process. "Center of the Sun" is the kind of punchy power pop they're known for; "They Ought to See You Know" has a real 70s feel, led by Adam Merrin's organ fills, and "After Hours" might be the quintessential 88 tune with its perky melody, Keith Slettedahl's up-front guitar and vocals and Merrin's ivory-tickling prominent. They also do the slower numbers well, with "As Far as I Can See" and album closer "Lost and Found" serving as Exhibits A & B. (Note: the album just wrapped up a 2-week exclusive on iTunes, and while it's on Napster now it hasn't shown up yet on eMusic) 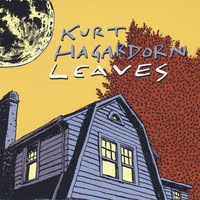 Kurt Hagardorn-Leaves. When we last left Kurt Hagardorn in 2007, he gave us the fine Ten Singles and on the new followup he continues his winning (and somewhat unique) blend of Dream Pop, Roots Pop and Americana. The rootsy title track kicks things off in the fashion to be found here, with kind of a Jayhawks-style roosty gait, and "Tail Lights" has a bit of Traveling Wilburys feel to it. Speaking of the Wilburys, a definite influence here is Roy Orbison. "Blown Away" has that melodramatic retro feel to it, and the haunting "Heartbeat" (the standout track on the disc and one of my favorite tunes of the year) finds Hagardorn crooning to an ethereal melody that David Lynch could have worked into one of his films. Leaves is the perfect accompaniment to a rainy Sunday morning.

Hey Steve. Enjoying your blog. Got a suggestion. Why don't you start including the Zune Marketplace as music store options? They also have The 88's new album. And contrary to popular belief, not everyone has (or wants) an ipod!!

The 88s album is now available at eMusic.