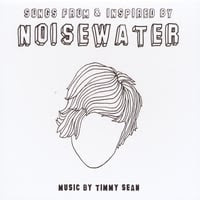 I always liked Luzer, a power pop band whose output during the previous decade was excellent but sporadic. Back in 2000, they titled their debut album "Greatest Hits", a cheeky move if there ever was one. A decade later, their primary singer/songwriter Timmy Sean has gone solo, and although he's created his debut around an imaginary film called Noisewater he'd be less presumptuous to call this one "Greatest Hits" as it's a power pop tour de force.

After a bit of throat-clearing to advance the conceit (the a cappella "Intro" and the very cool near-instrumental "Noisewater Overture" that sounds like something found on an early ELO album), he gets down to the body of tunes. "Girl from Omaha" is a busy, catchy piano-backed tune that recalls McCartney's "Nineteen Hundred and Eighty-Five", and that's followed by "Can't Stop the World", a slightly baroque pop track that would fit nicely on a Jellyfish album. "If Your Mother Has Her Way" has the kind of manic piano energy in the vein of "Long Tall Glasses"-era Leo Sayer, and "What You Do" has Todd Rundgren written all over it.

The assured and rollicking power pop of "Don't Waste Your Time" is the most Luzer-sounding track on the album, "Hold On" borrows a bit from the verses of "Evil Woman" (sans its disco chorus), and the bombastic "Wait" closes out the proper song section of the disc with an amalgam of the 70s-inspired pop styles Sean (or is Timmy?) of the previous tracks. We then come back full circle with the "Noisewater Reprise", of a piece with the overture. Although Timmy Sean notes that he grew up in the 80s, the sound here represents the most enduring and beloved power pop styles of the decade previous, and is one of the new decade's most impressive pop discs.

This is good stuff! thanks for the recommendation.

Yep...on the Zune Marketplace. Got it. Sorry. Just givin' the Zune some luv!!