CD of the Day, 9/8/10: Ian Olvera & The Sleepwalkers-The Reckless Kind 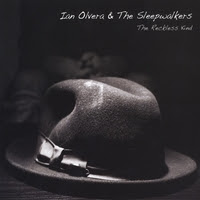 After regaling us with his 2007 debut EP Some of Us Dream, Green Bay's Ian Olvera is back with his debut full-length The Reckless Kind, accompanied by his backing band The Sleepwalkers. The Reckless Kind builds on the promise of the EP with its polished Americana-influenced pop that splits the difference between The Jayhawks and Tom Petty.

The stomping "Darkest Weather" opens the album and it has that feeling you get driving the open roads of the Midwest, and it's followed by the poptastic "Sophie Lives Here", a rollicking hook factory. "Don't Want to Talk About It" has a Exile-era Stones/Petty feel to it, a la Wilco's "Monday", and speaking of that Chicago band, "Is This It" also recalls their early heyday with its pedal steel-fueled rock. But the real standout here is the languid "Laundry & Cigarettes", an anthemic ballad that could be a hit in an alternate universe.

Elsewhere, the Wallflowers-esque "Ain't Nobody as Lonely as You" and the lovely, spare "In the Morning" close out the album in fine fashion. The Reckless Kind is a worthy addition to your playlist, and it's always great to see an artist grown from EP to LP.