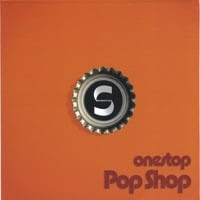 Washington DC's Onestop had been a covers band for a few years before finally committing to recording original material, and 2005's Pop Shop is the result. After listening to Pop Shop, I have to come to the conclusion that the boys sure must have done quite a few Barenaked Ladies covers. The result is pretty much a BNL album without the quirk (which is both a blessing and a curse) and the Canadian accents.

Nevertheless, it's pretty solid stuff. Tinges of Americana show up ("If I Only Knew Now"), and other deviations from the norm here include the 6+ minute "Lover's Land", which could pass for a Journey power ballad, and "High School Halls", a bouncy number with Beach Boy harmonies. The first three tracks from the album are available as mp3s from their site:

Big Design
If I Only Knew Now
She's Everything

You can stream these three, along with "Lover's Land" at their myspace page, and hear samples of the rest at cdbaby.

And for some reason I was craving orange soda after visiting their site. Luckily, I had some Publix store brand orange on hand; it's better and cheaper ($1.99 for a 12-pack) than Sunkist. Mmmmm....orange soda.
Posted by Steve at 12:01 AM