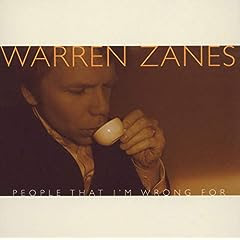 Well, here it is: the album we've (I've) been waiting for. Released into the wild today, Warren Zanes' People That I'm Wrong For is a worthy followup to his solo debut Memory Girls, my favorite disc of 2003.

My favorites are "Jr's Bag of Tricks", a jazzy/funky number with horns that has a killer chorus, and which Zanes claims was inspired by Patty Hearst (it positively SLA-'d me); "Ella's Arms", a rocking track that's almost Springsteenian; "Carrying Me/Carrying You", which reminds me of "First on the Moon" from Memory Girls; and the vaugely Beatlesque title track. And the remainder are solid tunes as well.

Best place to start checking it out (if you haven't already from my previous posts) is at his site, where you can stream about half the cd and get his track-by-track commentary. However, you'll have to go to his myspace page to stream "Jr's Bag of Tricks", as well as "Fool The Moon", so you'll end up getting to hear about 2/3 of the disc. And best of all, you can get it on eMusic here. While I've gone Zane-y over this one, it'll Warren-t your attention as well. (Forgive me, I woke up in kind of a goofy mood this morning.)
Posted by Steve at 7:44 AM