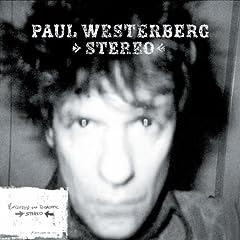 I was always a big fan of The Replacements. Time has revealed them to be one of the more influential and respected bands of the 80s, and for quite a stretch there, nobody in rock was writing better songs than Paul Westerberg. The 'Mats broke up in 1991 (although in reality it had been a bit sooner; their 91 swan song, All Shook Down, was pretty much a Westerberg solo album), and Westerberg embarked on a solo career that turned out to be maddeningly uneven. By the time he released his widely-panned third solo disc, Suicaine Gratification, in 1999, he sounded tired and defeated.

Shortly thereafter, he lost his major label deal (Suicaine was released on Capitol), and retreated to his home studio. Three years passed, and after being picked up by the indie label Vagrant, Westerberg released two discs simultaneously: Stereo, the official release, and Mono, a "bonus disc" that accompanied it. Mono was credited to his alter ego, "Grandpaboy", an alias Westerberg used to release an EP of rockers that didn't quite fit in with the singer/songwriter tack he took with his 90s solo albums.

Finally freed to follow (and rediscover) his muse, Mono/Stereo turned out to be the best and most consistent music Westerberg recorded since his heyday with the 'Mats. Mono is the real triumph of the two, an album of punchy power pop and balls-out rockers. The former is represented by the album opener "High Time", "2 Days Til Tomorrow", and the album closer "AAA" ("I ain't got anything to say to anyone anymore"), while the latter includes the Keef-influenced "Kickin' The Stall", "Eyes Like Sparks" and "Silent Film Star" (a kiss-off to Winona Ryder?).

Stereo is more the singer-songwriter album, and the album is largely acoustic, mostly Westerberg and his guitar recorded in his home basement studio. But unlike his half-baked 90s efforts, he brings better songs to the table, and his penchant for twisted wordplay that made many of his 'Mats songs true classics returns here: "Let the Bad Times Roll", for example, as well as "We May Be The Ones" ("up close, we look far away"), "Only Lie Worth Telling" ("is that I'm in love with you") and "Got You Down" (its double meaning title describing both the emotional state and predictability of a woman involved with a married man).

All in all, two outstanding albums that re-established Westerberg as one of our premier songwriters. The best place to give Mono and Stereo a listen is at Amazon, where you can get 30-second clips. Stereo is available at eMusic, and so is Mono, although it's under Grandpaboy (thanks to JB for finding Mono on eMusic). If you loved the 'Mats but solo Westerberg put you off in the 90s, go back and get this combo. You won't regret it.
Posted by Steve at 9:41 PM

Actually, Mono is available at eMusic. It's just credited to Westerberg's "Grandpaboy" moniker.

I love Mono. I think the 4-track sound suits Westerberg's music. Wish I'd gotten out to see him last time he toured.