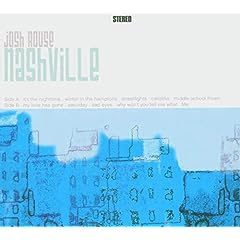 Despite my less than enthusiastic thoughts about his forthcoming album Subtitulo, regular readers know that I'm still a big fan of Josh Rouse. And last year's Nashville is one of the main reasons why.

Nashville is kind of a career consolidation/summation for Rouse - in other words, it's a greatest hits album of brand new material. Although it doesn't hit the highs of his previous two albums, Under Cold Blue Stars and 1972 (he may never write a song as perfect as "Rise" again), Nashville is solid from the incredibly catchy opener "It's The Nighttime" (complete with pedal steel, perhaps the only song on the album that reflects the album title) to the ruminative closer "Life".

There are so many great tracks on this album: The Smiths-influenced "Winter In The Hamptons", the lush "Streetlights" (which even nods to Journey of all artists with its "streetlights/people" refrain), "Middle School Frown", a confessional that mines new territory (most songs that reminisce upon school days tackle the high school years), and the majestic piano ballad "Sad Eyes", which kicks into another gear once the bridge comes in.

There's the feeling here that Nashville is in fact a summation, as Rouse said goodbye to his native land and has since moved to Spain. If so, it's one hell of a sendoff.

Being a semi-major label release (Rykodisc), the best place to sample it is at the Amazon link above. It's of course widely available from just about any music retailer (unlike my last 2 CDs of the day). Odds are if you're reading this blog you probably already have this anyway. But if for some reason you were on the fence, get off it and get this record.
Posted by Steve at 9:00 AM