My #1 Album of 2004: The Ike Reilly Assassination-Sparkle In The Finish

Now that I've dispensed with the top 20 of 2005, it's time for a new recurring feature: My favorite albums of recent years. Off the top of my head, I can go back to 1997, so I'll go at least that far back. Without further ado, here's the 2004 installment. 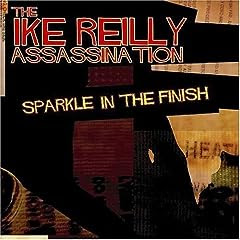 Wayne Bledsoe of the Knoxville (TN) News wrote this about the Ike Reilly Assassination's Sparkle In The Finish, and I'd swear he was channeling my thoughts:

"Every once in a while, an album comes out of nowhere from someone you've never heard of and becomes your favorite album of the year. "Sparkle in the Finish," the second disc by Libertyville, Ill., native Ike Reilly is exactly that kind of record. Reilly's combination of power pop, Americana and even white-boy hipster rap is irresistible."

Sparkle In The Finish indeed became my favorite album of 2004, and it's a real tour de force. Reilly is an incredibly inventive lyricist, and if he were 20 years younger and black (or even remained white, I suppose), he'd likely be one of the biggest rap stars today. Instead, his gift of verbal facility is used in service of some great power pop and rock songs, with one exception: the rapping "I Don't Want What You Got (Goin' On)", in which Reilly namedrops Chuck Berry, Ludacris and Jerry Lee Lewis over a Beck-like beat and it somehow works. While its verses are rapped, the chorus is killer guitar rock.

And then the power pop kicks in. "Holiday in NY" finds Reilly unable to please his woman and lamenting his buddy's drug addiction (a theme that found its way to his also lyrically clever, but less musically enjoyable, 2005 followup Junkie Faithful) and "Whatever Happened To Girl In Me?" rocks with abandon.

But the real highlights of the album come about midway back-to-back: "The Boat Song (We're Getting Loaded)" is Reilly's kiss-off to all of those who he's found annoying, including himself ("The Willy Lomans of rock'n'roll") atop a great melody. The lyrics can be found here. And then there's the excellent "Garbage Day", in which Reilly meets a girl at a protest outside of an execution and ends up dumping her at "a strip joint in the basement of a transient hotel", set to a sing-along chorus.

Things do trail off a bit after that, with some good but not great tracks thereafter, but the highs on this one are so high that they blew away any shortcomings the rest may have had. Reilly is a true talent, even if he's past the prime age for music stardom.

With this album not being Reilly's latest release, it's not easy finding promotional streams and mp3s. You can stream "I Don't Want What You Got (Goin' On)" from his site, but unfortunately the stream for "Garbage Day", while listed, appears to be disabled. The only myspace page for him is a fan-created one that doesn't stream any tracks. 30-second samples of all the tracks can be found at CD Universe. You can pick it up for as little as $4.79 at the Amazon marketplace, and it is available via iTunes.

In closing I have to quote this reviewer from Pop Matters (who wrote a much better and more in-depth review): "this record kicks my ass like it's Ron Artest and I just threw a beer at it."
Posted by Steve at 12:50 PM