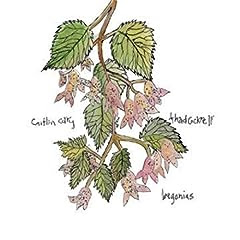 This release isn't power pop - not even close. In fact, I'd almost hesitate to call it alt-country either; it's almost more traditional country, in the vein of George Jones & Tammy Wynette or Gram Parsons & Emmylou Harris. Whiskeytown alumnus Caitlin Cary and solo alt-country artist Thad Cockrell's Begonias is a worthy successor to the great music produced by those classic duos. Now the song that sucked me into this album is the anomaly: the rocking "Second Option", in which Cockrell does a better Ryan Adams than Adams himself is doing these days, making it sound like a long-lost Whiskeytown track.

But the rest of the album is stunning as well, from the cover of Percy Sledge's "Warm and Tender Love", the beautiful "Please Break My Heart" and the poignant "Two Different Things". It won't be for everybody here, but if you're inclined to like alt-country, as well as traditional country (as opposed to most of today's homogenized "contemporary country"), this one can't be passed up. The Amazon link above is the best place to sample.

UPDATE: Forgot to mention that this album is available on eMusic!
Posted by Steve at 7:15 AM