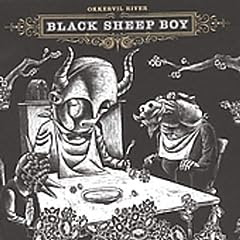 It might seem strange a non-power pop release holds down my lofty #2 position, but Okkervil River's Black Sheep Boy was that good. It's a tough album to categorize neatly: one part Indie, one part Americana and one part Emo. In a similar vein, Conor Oberst a/k/a Bright Eyes broke through last year with this formula, but he sounds like a relative lightweight compared to Okkervil River on this one. In fact, the musicianship and vibe here makes this album sound like a less self-indulgent and less cloying Oberst backed by The Band.

After starting off with the title track, a cover of a Tim Hardin song, frontman Will Sheff and the band rip into "For Real", a rocker that's equal parts Wilco and My Morning Jacket. Other highlights include "Black", another uptempo number; "A King and a Queen" and "A Stone", which really do sound like a couple of lost Band tracks, and the epic "So Come Back, I Am Waiting", which builds to a Springsteenian climax. Here's a review that gushes more than I do about this album.

Grab a couple of mp3s from the album:

You can sample the rest of the tracks at the amazon page linked above. And if you end up digging this album, I'll note they followed it up later in the year with the Black Sheep Boy Appendix, an EP of leftover tracks from the BSB sessions that's pretty darn good for leftovers.
Posted by Steve at 9:19 AM